According to Medscape Medical News, Dapoxetine Hydrochloride (Dapoxetine) has been shown to be effective in all doses for treatment of premature ejaculation. Experts are hopeful that this promising treatment will do for PE what other hugely popular drugs have done for erectile dysfunction.

There are many products that claim to help with PE, but this is the first that is simple, quick and has been proven in scientific studies. Dapoxetine is an easy, on-demand solution for the 30-70% of men who experience premature ejaculation and are looking for a way to last longer in bed.

Dapoxetine was developed specifically for enabling men to lengthen the time before ejaculation. An imbalance in the brain chemical Serotonin has long been believed to be a factor in rapid ejaculation. Because of this, SSRIs are often used “off label” to treat men who experience severe premature ejaculation. Dapoxetine is considered a “novel SSRI”, however,    because unlike many similar medications that take over 2 weeks to become effective, it starts working within an hour. The drug is is also quickly metabolized by the body. This eliminates the risk of long term side-effects often associated with other SSRIs.

Dapoxetine HCL is the first orally administered drug developed specifically for the treatment of men with premature ejaculation. The safety and effectiveness of Dapoxetine for the treatment of men with PE were studied in five, double-blind, placebo-controlled, Phase III clinical trials. These trials involved over 6,000 men from 30 countries worldwide, including countries in North America, South America, Europe and Asia, and in Israel and South Africa.

The results of these trials were overwhelmingly positive. It worked and it was shown to be safe. Men taking the 30mg dose increased time before ejaculation by 308%. For the 60mg dose, the increase was 369%. Participants in the study took a single dose from 30 minutes to 4 hours before intercourse. Although rare, the most common side effect was nausea, and this was more likely to occur with higher doses.

Overall, the men who received Dapoxetine reported greater control over the timing fo their orgasms, and increased overall satisfaction with the sexual experience. No doubt, their partners felt the same way.

The European Marketing Authorization Application for Dapoxetine was submitted under what is referred to as the “decentralized procedure”, whereby Sweden acts the Reference Member State and Austria, Finland, Germany, Italy, Portugal and Spain will act as the Concerned Member States for the application. Regulatory submissions and approvals in other regions of the world are expected to follow.
DAPOXETINE Instructions:

Usage:
Take 1 tablet per time, once a day, 15 minutes before sexual intercourse with warm boiled water.

1. Please do not be anxious to see the effects! No overdose!

2. Do not take DAPOXETINE tablets again within 24 hours! 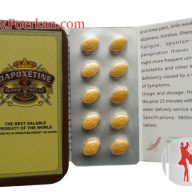