Dosage and usage: Take it orally. 10 pieces per time and 2 times a day with light salt water or boiled water. Those with chronic illness who take 15 days for a course of treatment, stopped for 2 days, and continued to take the second course of treatment, the curative effect increased with treatment time.
Adverse reactions: Still uncertain.
Taboo: Pregnant women are not allowed.
Precautions: Hypertensive persons should be used with caution or as prescribed by doctors.
Medicine Interactions: Drug interactions may occur if the users take it together with other drugs. Please consult a physician or pharmacist before using the product.
Pharmacology and toxicology: Still uncertain.
Storage: Sealed, moisture-proof.
Packaging: Aluminium plastic plate, 60 pills / box and 2 boxes per pack.
Validity period: 36 Months.
Approval Number：Chinese medicine accurate character Z52020066
Company Name：Guiyang Dechangxiang Pharmaceutical Co., Ltd. 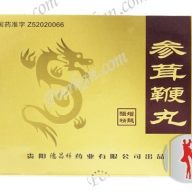